Harper’s Bazaar announces “metal shirt and trousers” as the look of the summer; world ends. 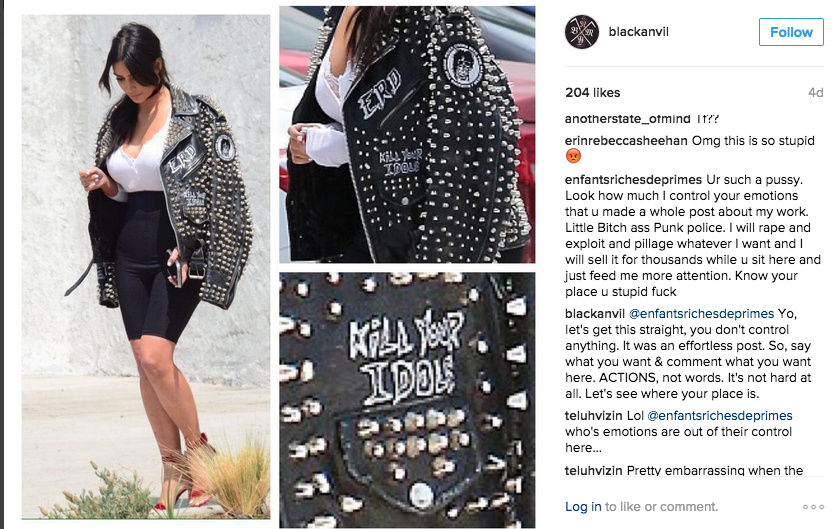 So yeah, the co-opting of metal culture as a fashion statement has been going on for years. At least since late (November) 2012, when rapper Chris Brown was spotted wearing a DIY inspired leather studded jacket with metal patches and logos. Interestingly enough, he apparently borrowed it from Rihanna, who apparently wore it on the back of one of her albums to look “edgy”.

That in and of itself kind of sucked, because frankly I hate seeing anyone who doesn’t listen to a band wearing their merchandise. Call me old fashioned. I mean, I don’t know it for certain because I haven’t asked them – but call it a sneaking suspicion that Rihanna and Chris Brown don’t even know who the fuck COC or the Cro-mags are. It’s a wager I’d take.

Fortunately, the fashion industry and the world in general were pretty slow on the uptake when it came to co-opting and grossly exploiting a subculture. In May of 2013, Kanye West was wearing the equivalent of “metal inspired clip-art” on sweatpants (and Rihanna was spotted wearing an entire outfit from the line). Fucking sweatpants. Turns out it was a seasonal fashion line from some British designer. It also included football should pads, so I figured it was just a one off thing. After all, it was a British designer, and we all know British people are just fucking weird.

Then shit started getting real. Urban Outfitters, fucking URBAN OUTFITTERS (that hipster piece of shit clothing store) started selling a fake Megadeth, Dio, and WASP jacket – I’m still not sure how they got around copyright infringement on that one. The fucking thing sold for 375 bucks too – show me a single metalhead who can afford that and I’ll show you a fucking liar.

So, within the time-span of a single (November 2012 to September 2013) year we’ve gone from a couple of washed up hip-hop artists wearing faux metal spin offs to American clothing lines picking up the trend .

Enter 2014. Suddenly, you’ve got everyone from Justin Beiber to Amy Poehler to the Kardashians to Kanye West (again) sporting vintage metal shirts. Lady Gaga was purposefully left out of that list because she legit listens to Iron Maiden, but I digress. One store, H&M, actually got it right and was selling legit Slayer and Metallica shirts for cheaper than you can buy them artist direct.

At this point in time, while working in Upstate New York I was approached on break by a couple of temp workers from the city (for those of you who don’t live in New York, anything south of Poughkeepsie is considered “the city”) who complimented my kutte and asked where I had purchased it. The look of surprise on their faces was genuine when I told them I made it myself.

Up until this point I had been under the impression that the whole co-opting of metal and punk culture was a pastime reserved for rich, bored people in the entertainment industry who wanted to get some attention in a futile attempt to remain relevant. Boy was I fucking wrong. Apparently it’s really a “thing”. Oh, well – at least fashion is a fleeting thing right? There’s no fucking way anybody will actually seriously consider wearing shirts I was forced to turn inside-out at school as a fashion statement right? Right?

So, 2015 rolls around. In March, H&M actually started selling a clothing line of slightly altered but totally ripped off metal culture inspired clothing. This was about the time people in the metal community started noticing, and even started firing back a bit. Someone with an obvious knowledge of the metal community and a lot of time on their hands actually started a fake promo company that linked itself with the clothing line. They made up bands, albums, social media profiles, and music with a complete fake back story for each of the faux band patches represented on H&M’s clothing line. The best part? They were all neo-nazi/NSBM bands. Fucking brilliant. H&M started freaking out about it. A little while later, Finntroll guitarist Henri Sorvali confessed that he and a few of his buddies made the whole thing up, unbeknownst to H&M. This was masterfully done. When asked why he and his friends did this, Sorvali responded,

“metal culture is more than just “cool” looking logos on fashionable clothes, and has many more aesthetic and ideological aspects in different subgenres than what some corporations are trying to express. The metal scene is varied, controversial and a sort of a wolf you can’t chain into a leash and expect it to behave on your terms like a dog. Strong Scene as a collective has absolutely no political nor ideological intentions, and is only bringing the conversation to the level it should be discussed at.”

Thankfully, the clothing line (as far as I know) tanked.

Then, the clothing line “Diesel” decided to get in on the fun. I’m not sure what’s worse, the fact that they were charging $300 bucks a pop for a fucking cut-off denim vest with fake patches on it or the fact that they mixed thrash with crust punk by adding a matching pair of pants.

So, this whole fashion thing has to have peaked right? Wrong. Urban Outfitters doubled down and started selling a lot more metal shirts, but started charging like $54 a pop ($200 for a vintage Black Sabbath shirt, and they fucking sold out). Fuck, at least you can go back to artist direct merchandise and retain some sort of integrity.

The real crime in this whole thing though was the story of a dude who had his kutte stolen at a show in Oregon, and it mysteriously showed up in a display case at Macy’s in New York a few years later. As soon as he figured it out, there was a lot of outrage and an online campaign to return the vest to it’s rightful owner. Thankfully, it was successful. What the fuck Macy’s was thinking putting a genuine battle-vest on display in one of their stores, I’ll never figure out. But it does illustrate the greater point that there’s a trend in popular culture to rip-off and exploit members of sub-cultures in America with absolutely no respect given to the members whatsoever.

Fast forward to 2016. Now you’ve got Justin Beiber specifically designing his merchandise to with heavy metal themes, high end fashion companies co-opting death metal logos for their merchandise, Kanye West co-opting Metallica’s logo for his own clothing line, Black Sabbath collaborating with Supreme for a new clothing line (don’t get me started with Sabbath and fucking publicity stunts), AC/DC included in a Gucci clothing line, and fashion magazine declaring a cutoff vintage metal shirt and slacks “the look of the summer“, and that all American piece of shit Kim Kardashian wearing an $11,000 studded leather punk jacket complete with band patches. The designer received no permission from the artists who’s patches he blatantly included in his 11k fashion statement. When confronted by the bands on social media about this the designer responded,

“Ur such a pussy. Look how much I control your emotions that u made a whole post about my work. Little Bitch ass Punk Police. I will rape and exploit and pillage whatever i want and I will sell it for thousands while u sit here and just feed me more attention. Know your place u stupid fuck”

Fuck me running. That’s enough money for a lawsuit on a registered trademark. Here’s to hoping.

This topic seriously pissed me off for years, and I’m still not sure how metal suddenly because the “cool”, “in” thing. Well, it’s not – I mean 99.9% of the people sporting this shit would never listen to metal. I guess there’s a funny sort of irony in that – people wanting to look like a subculture with a 30-40 year reputation of giving them the middle finger. And wearing things with absolutely no idea what any of it means.

In conclusion, I blame hipsters.

3 thoughts on “Harper’s Bazaar announces “metal shirt and trousers” as the look of the summer; world ends.”