No, Metalheads Aren’t All Supposed to Get Along

The Heavy Metal sub-culture is a patchwork tapestry of inter-related scenes and subcultures known as a bricolage culture. Viewed as a whole, it can be generalized that it’s dualistic in nature.

I’ve written articles detailing the inherent divide in heavy metal, as well as the current incarnation of that divide. Building on this body of work, the purpose of this article is to discuss the nature of the relationship between the mainstream and underground factions of the culture with the express intent of shedding some clarity on the nature of Heavy Metal Culture as a whole. Specifically, the nature of discourse between members of the culture in relation to the music.

Due to societal reactions to metal since it’s inception, heavy metal culture at it’s core is inherently populist in nature.

What I mean by this is that heavy metal is a musical style that caters to the needs and desires of the fanbase – the consumers tell the artists what they want. This is exactly opposite to the business model of musical culture in general – where major labels and musical oriented media (from now on I will refer to it as the Pop Machine) tell people what to like.

Now, the standard musical model of “taste-makers” telling consumers what is good/popular has it’s benefits – mainly that musical boundaries are clear and concise. There is little to no room for discourse, because musical definitions and standards are pre-defined for the consumer. The consumer is free to take it or leave it, and discussion is set within certain parameters. However, the entire setup is contrary to what a lot of people understand art to be – a manifestation of individualistic expression that exists for personal interpretation.

One of the things that the pop machine has been pretty consistent about is it’s rejection of metal music. Since rock critics first started writing about Black Sabbath in the early 70’s, metal has been institutionally ignored, discarded, set to the side, and left to it’s own devices. Normally, this would mean the death of a musical movement – as a lack of radio play and media coverage by the pop machine is meant to squash out artistic movements that do not conform to the pop machine standard.

A lot of the modern day prejudices against metal bands and fans are a direct result of the pop machine. The very survival of the musical style required a following that, in time, would become a culture. Critics touting the music as a low-brow art form that caters to the lowest common denominator since the 70’s literally set the tone for a key aspect of metal culture – it’s inherently oppositional nature.

This nature served it well in the decades that followed. In the 80’s metal become the moral panic of the day – it was used to scapegoat aspects of the culture that then (then) conservative majority disliked. This peaked in the now infamous PMRC campaign that led to a (partially successful) congressional hearing in the United States relating to the censorship of ALL music.

Conservatives opposed heavy metal culture due to it’s inherent opposition to authority, and Liberals opposed it due to the admitted hedonistic nature and low-brow appeal. The church opposed metal culture because, well, metal culture opposed the church in most cases. The music and it’s culture were under constant scrutiny and assault for the better part of a decade. This is not an environment that breeds “happy go lucky” or “inclusive” cultural traits. And the 90’s weren’t much better for metal. The police were trained to target metal fans as criminal lowlifes. The pop machine declared metal dead (wishful thinking?). When a few sick kids in Columbine got together and planned a horrible school shooting, heavy metal was the scapegoat. And so on, and so forth. 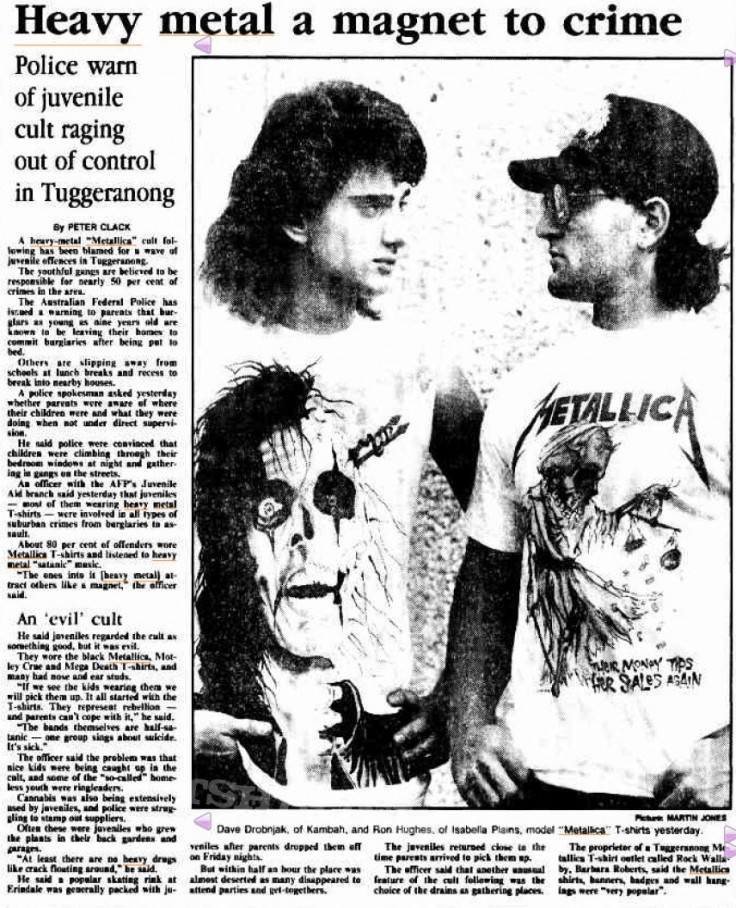 So, we can see that for (at least) the better part of 30 years heavy metal culture continued to exist specifically because of it’s oppositional nature. And the nature of that culture is reflected in it’s membership. Metalheads, by and large, have a confrontational and aggressive component to their personalities. It’s not up for debate, it’s just a fact. This may seem contrary to scientific studies that state exactly the opposite (that metal fans are creative, easy going, introverts with high self esteem – closer to the profile of a classical music fan) – but it all makes sense in context, so please bear with me as I stumble through an explanation.

I think metalheads, in large part, are attracted to metal because it offers a healthy outlet for negative emotion (i.e. the aforementioned aggressive/confrontational proclivities). Without all those pent up, negative emotions an individual is better able to function – so the personality traits displayed in scientific studies are expressed.

So, while metalheads may be more well adjusted than your average person – they still retain an inherent combative/oppositional nature. The culture reinforces this, and the attitudes then reinforce the cultural position – it’s cyclical.

Back to the Present Day

Applying this to the present state of heavy metal gives a little context and clarity to the situation. As noted by Sam Dunn in one of his Banger segments (I believe it was the one discussing metal in popular fashion) – heavy metal has lost a lot of it’s “outsider” status. It’s not as culturally threatening as it was even a decade ago. As such, major opposition to heavy metal has virtually disappeared – but that confrontational nature still exists. The most common expression of this is through infighting.

Some people might scratch their heads at this, but it makes perfect sense. I’ve heard metal culture referred to as a “big family”, “friends you’ve never met”, and a bunch of similar pseudo-hippy garbage terms. A more accurate description would be that metalheads constitute a “neo-tribal culture” based around a common appreciation for an art form.

So, tribe/clan/family unit are all pretty much synonymous – but there’s an inherent flaw in the way that most people view these terms. The problem is that they’re using a romantically charged view of a family unit or tribe. We’re conditioned as individuals to view families as some lovey-dovey unit that never disagrees. The reality of the situation, whether you like to admit it or not, is muuuuuch different.

So, however you want to frame it, the reality of the situation is that the “metalheads are a family” comparison is very accurate. Anyone who feigns surprise that metalheads are going to argue is only kidding themselves (and clinging to a romanticized false notion of a family). It’s as natural as tribal warfare, sibling rivalry, or family feuds (those colloquialisms weren’t just plucked out of thin air).

The thing is, there’s another side to this. Besides all the bickering and feuding – there’s an unwritten rule that applies to both family members and metalheads. I’ll give an example – I’m the only person allowed to talk shit about my family. If anyone else does it, they get the business end of my entire fucking family.

It’s very similar with metal – and this isn’t just theory. Remember the PMRC hearings? Death metal and Thrash weren’t the direct target of that scandal – it was (predominantly) hair metal. Was Dee Snider left to fend for himself? Fuck no he wasn’t – because the only people who can bash hair metal are metalheads.

The same principle stands true today – if there was a large entity attacking heavy metal (using a metalcore or deathcore band as a scapegoat), they would meet with a much larger resistance than originally anticipated – because that’s how the metal machine operates (note – blackgaze isn’t metal so, assuming they managed to offend anyone, I personally would totally throw them to the wolves).

The infighting within metal culture is a good thing, and it’s totally natural. Granted, some of the bigger sites (that started as independent but have since become part of the pop machine) might egg it on for money and website traffic – but they’re not pulling conflict out of nowhere. It’s a natural expression of metal culture, and an acceptable form of participation that (among other things) creates an environment where competition is encouraged.

I guess the message here is that newcomers to the metal community need take a step back so they can see the forest for the trees. Because Metal Culture fucking rules, infighting and all.