Should Someone Tell Lady Gaga Her “Metallica” Tattoo is Really a Death Angel Tattoo?

In the interest of full disclosure – I like Lady Gaga.

Not her music, that’s shit.

But she seems like a cool person. I’ve mentioned in other articles how cool it is that she’s a legit metal fan (Maiden and Metallica, at very least). That’s why I’m hoping an appropriate amount of time has passed to let her know that her Metallica tattoo isn’t really a Metallica tattoo.

From the album they released the same fucking year as Metallica’s new album (The Evil Divide).

Probably an innocent mistake. After all, Lady Gaga was performing “Moth into the Flames” with Metallica – so she presumably wanted to get a tattoo to commemorate the occasion. A moth is a natural selection to make – and she made it more “metal” by adding a skull.

What I can’t believe is that nobody – fucking NOBODY – saw this and was like, “Hey, Lady Gaga, that’s a really cool tattoo idea. But that’s the symbol on Death Angel’s new album.”

I like to picture it going down something like this. The tattoo artist was a disgruntled thrash-head from back in the day. He had a strong preference for Death Angel’s new album over Metallica’s. And when Lady Gaga went in to describe the tattoo she wanted, he had an epiphone.

“She’ll thank me in the long run, ‘The Evil Divide’ was much better than Hardwired”

“I’m going to troll the fuck out of Metallica at the Grammy’s” the anonymous tattoo artist thought to himself. At one point he even whispered, “I’ve got your fucking Black album right here, Sell-outtica”

Lady Gaga (hypothetically) responded with a, “What? I couldn’t quite hear you.”

He responds, “Nothing”, and diligently goes back to work. The hilarity of Lady Gaga showing off a Death Angel tattoo to honor Metallica  gets him through the 4-7 hours of tattooing – in fact, he debated not charging her.

After all, virtue is it’s own reward.

Later that day, I like to picture said tattoo artist meeting up with his buddy for a few brews. The topic of conversation – how horrible every Metallica album after “Justice” was (the same conversation they’ve been having for roughly 30 years).

After said tattoo artist relays his work of creative genius to his friend, the response was appreciative but inquisitive. “Do you really think anyone watching will get the reference? I mean, it’s pure fucking genius. But unless they’re thrash fans, they might not get it. You have to appeal to the lowest common denominator. Like, a lot more people would understand if they played a Metallica song while Megadeth walked up to accept an award. Lowbrow – lowest common denominator stuff”

Reflectively, the tattoo artist responded, “I guess you’re right. But honestly, I don’t even think people would get the Megadeth/Metallica reference. That’s still a bit obscure for this audience. You’d have to have something really low-brow, like the announcer forgetting to even fucking mention Metallica. And even that slight might be overlooked unless something more urgent followed – for fuck’s sake they’d have to leave Hetfield’s mic off for like 1/3 to 1/2 the song.”

His friend responded, “That’s fucking brilliant. I bet that’s all they’d report on Metal Sucks and Metal Injection, they’d milk that fucking cow for like 3 days.”

Unbeknownst to them, a few select members of the Grammy planning committee were (presumably) listening in at a nearby table. They realize that this is the perfect way to keep people talking about the event for days.

I like to picture them drinking something with an umbrella in it. 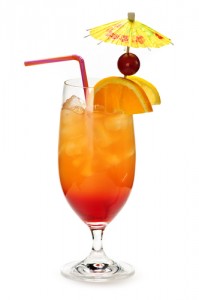 Back to the Fantasy Montage

So, the night of the Grammy’s, the plan comes to fruition. Everything goes according to plan.

Meanwhile, the real hero of the night is overlooked.

We here at Metal Stuff salute you, (hypothetical) brave soul who offered up the real middle finger to Metallica for playing the very awards show that snubbed them in favor of fucking Jethro Tull for the very first metal award ever.

A Side Note to Lady Gaga

This is why we don’t get spontaneous tattoos. On the bright side, if you’re trying to get credibility in metal culture – a Death Angel tattoo goes a lot further than a Metallica tattoo nowadays.

6 thoughts on “Should Someone Tell Lady Gaga Her “Metallica” Tattoo is Really a Death Angel Tattoo?”